This is a very cool crowdfunding campaign – you can help create a new cancer drug and at the same make it much cheaper. How? The researchers will not patent the drugs. Like polio vaccine, which was never patented, therefore it was widely available. Check out the website and the video. I loved it and made a donation of $50, because I find projects like this can change the existing paradigm in healthcare when the existing drugs are just deadly expensive. I encourage you to support the project and share it with your friends.

By the way, in aging there are also drugs that can never be patented like aspirin, metformin and rapamycin, but may well extend our lifespan. No pharmaceutical company will be interested in looking at substances that can’t be patented, but this could make our lives longer and healthier.

Role of Mitochondria in Disease 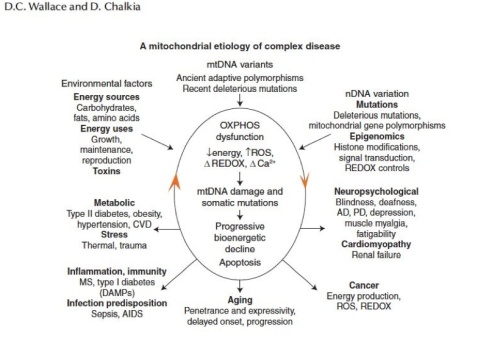 Mitochondria have essentially three major functions. They are responsible for cellular respiration, integration of apoptotic signals, which means they control cell death, and production of reactive oxygen species (ROS). Mitochondrial function declines with age as a result of accumulated mutations in the mitochondrial DNA. Mitochondrial disfunction is common in diseases, such as diabetes, neurodegenerative pathologies and cancer.

Interestingly, Dr. Cohen mentioned that there were only three Nobel prizes for research in mitochondrial biology. He anticipates that quite soon there will be a Prize awarded to mitochondria research.

Mitochondria are very different in different tissues. They vary in size, numbers, histologically and in proteins they have. Energy production levels also vary quite significantly. This is due to differences in cellular environment in different cell types. Mitochondria adapt to the surrounding situation.

Mitochondrial DNA can be used to track ancestral origins of the population. For example, all Ashkenazi jews, and there are approximately 8 million of them on the planet can be tracked down to 4 Italian women who lived around 2 thousand years ago.

There are numerous diseases associated with mutations in mitochondrial DNA. It is absolutely not clear why so specific phenotypes are associated with given mtDNA mutations. For exapample, the DEAF 1555 mutation is extremely rare (only 50 families in the world) and only affects the inner ear and nothing else. It causes deafness. However a close mutation is more widely spread and causes both deafness and diabetes. It is absolutely not clear why this happens.

The most common mutation is MELAS 3243. It stands for myopathy, encephalopathy, lactic acedosis and stroke-like episodes. The severity of pathology differs significanly in individuals who have this mutation. Some may only have mild metabolic disfunction, but others would have severe diabetes.

Dr. Cohen believes that upto 90% of healthcare costs can be reduced by diet and exercise. Unfortunately, lifestyle changes are rarely enforceable.

Mitochondrial dysfunction is recognized to be a contributing factor in malignancy. Specifically, it relates to a transition from aerobic to glycolytic metabolism, resistance to mitochondrial apoptosis, accumulation of mitochondrial mutations and increased levels of mitochondrial transcripts of various lengths in certain cancers, in particular from the 16S rRNA.

Diet and excersise significanly improve mitochondrial function. There are also 3 drugs that are PPAR-gamma agonists that improve mitochondrial function. As do drugs like GLP1, insulin and metformin. Of course, it is not a good idea to supplement yourself with insulin, however metformin seems very promising, especially given the recent publication where patients who have diabetes and take metformin have better survival curves than healthy controls.

When UCP-2 protein levels go down, mitochondrial function is impaired, because the glucose/fatty acid metabolism ratio is changed.

A recent paper showed that mitochondria trancriptome is in fact very interesting and further studies may shed light onto the so far unknown mechanisms of mitochondria function regulation. For example, this paper showed differences in the 13 protein expression ranging from organ to organ. There were also sense and anti-sense RNA detected, as well as small RNAs with unclear roles. Apparently there’s much more to the story of mitochondrial genome and its function that we now understand.

There was a paper by Andrew Dillin and his team that posited there are mitokines that are secreted in the brain, but operate in the gut. It is not known though what mitokines are.

Mitochondria do produce small peptides that influence cellular function. Dr. Cohen has discovered a peptide called humanin. Apparently, higher levels of humanin are associated with less Alzheimer’s disease and less cardio vascular disease. IGF1 decreases humanin levels. More research should be done in mitochondria-derived peptides, since it seems that they may play quite important role in aging and disease.

On a side note when talking about diabetes Dr. Cohen mentioned there are only 5 types of diets: reduced amino acid intake (less meat), reduced carbohydrate intake, reduced fats, low calorie diet and intermittant fasting. He believes that it may be a good idea to adjust one’s diet according to the certain disease risks. For example, if a person has elevated cancer risk, then they should consume less amino acids, and those with higher cardiovascular risks may want to stay away from carbs-enriched foods. These are of course speculations. The only diet that was proven to be beneficial in terms of reducing disease risk is the Midetteranean diet.

Filed under Biology of Aging

How to Win the Palo Alto Longevity Prize

$1,000,000 is the recently announced prize by Joon Yun, a Palo Alto-based entrepreneur, who is willing to donate this amount of money as an incentive to end aging. Half of the million will be given to the team of researchers who are able to extend lifespan by 50% in a model animal, and the other half – to those who manage to “demonstrate that it can restore homeostatic capacity (using heart rate variability as the surrogate measure) of an aging reference mammal to that of a young adult.”

Performing the experiment described below will secure winning the Homeostatic Capacity half of the Prize. The probability of the proposed study to demonstrate significant improvement of the heart rate variability marker is extremely high, because parabiosis was already shown to promote functional parameters of the nervous and cardiovascular systems. Now, by using a young clone we can reduce all possible immunological adverse reactions to the minimum and see how the old animal rejuvenates because of the circulating systemic factors produced by the young clone. Check out the detailed prize-winning study description here.

One of the most productive paradigms of aging suppression is based on rejuvenation of blood-borne systemic regulatory factors. Parabiosis, which is characterized by a shared blood supply between two surgically connected animals, may provide such experimental paradigm. We propose to use heterochronic parabiosis, the parabiotic pairing of two animals of different ages, for old mouse rejuvenation. Heterochronic parabiosis also provides an experimental system to identify systemic factors influencing the aging process of the old mouse and promoting its longevity. The optimal rejuvenation effect of heterochronic parabiosis can be achieved by using cloned (genetically identical) animals. This will help avoid potential side effects caused by immune response. 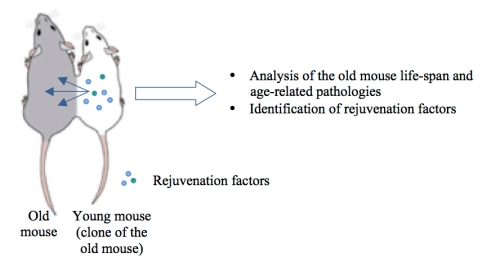 The early reported studies that used heterochronic parabiosis in rodent models to study lifespan regulation provided evidence of significant benefit to the older parabiont (reviewed in Conboy et al., 2013; Eggel, Wyss-Coray, 2014). Heterochronic parabiosis resulted not only in lifespan extension of the older parabiont (Ludwig & Elashoff, 1972), but it also promoted functional and regeneration potential in the aging central nervous system (Ruckh et al., 2012; Villeda et al., 2011), muscle and liver (Conboy et al., 2005), reversed age-related cardiac hypertrophy (Loffredo et al., 2013) and some other age-related parameters. Thus heterochronic parabiosis experiments indicate that blood-borne signals from a young circulation can significantly impact the function of aging tissues. The implication of these findings is that old tissues might make their function almost as well as young tissues if, by means of systemic influences, the molecular pathways could be ‘rejuvenated’ from an old state to a young state.

The aim of the project is the comprehensive investigation of rejuvenation potential of cloned mice heterochronic parabiosis.

The study is performed in five groups of animals:

The parabiosis is established at the age of 18 months for old partners and 2 month for the young ones. The detailed life span assay reveals the influence of heterochronic parabiosis with young clone on cardiovascular, nervous, respiratory, skeletal and muscular systems. The lifespan assay shows the young clone parabiosis impact on longevity of older partner.

In addition, systemic factors, which influence the aging process of the old mouse and promote its longevity and rejuvenation, are revealed.

Filed under Biology of Aging